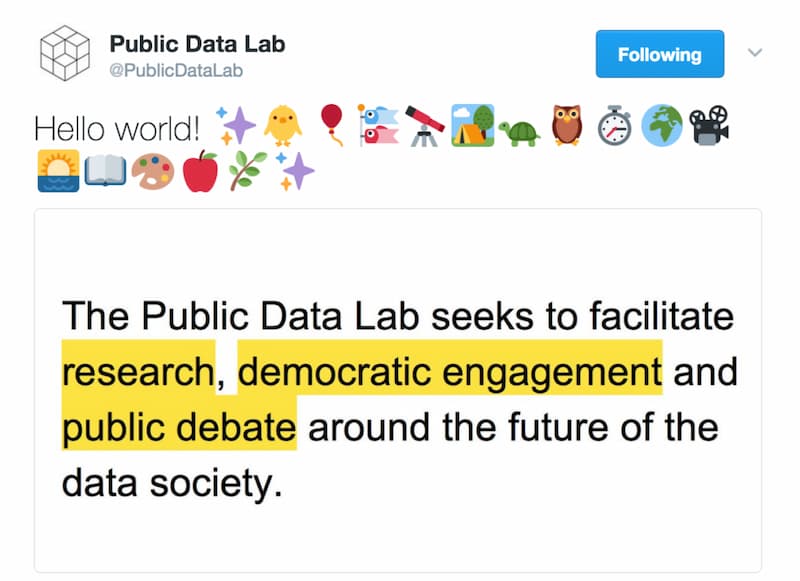 Apart from working on my Data Worlds book, one of the things that I’ve been doing as part of my Prize Fellowship at the University of Bath is working to set up a new trans-national, trans-institutional Public Data Lab. I’m delighted to announce that Sage Publishing have recently committed to supporting the lab to help get us started.

As I commented for the press release:

We are delighted to be working with SAGE to establish the Public Data Lab. Given its world-leading role in publishing social science research and methods texts, as well as its work to support innovative research around the social, political and cultural consequences of datafication – including through venues such as Big Data and Society – SAGE is the perfect fit for us. We are also particularly appreciative of its role in supporting open access publication. We look forward to exploring how the lab can advance methods and working formats to broaden participation and enrich debate around the creation and use of data in society.

The founding mission of the lab is as follows:

The Public Data Lab seeks to facilitate research, democratic engagement and public debate around the future of the data society.

We want to develop and disseminate innovative research, teaching, design and participation formats for the creation and use of public data.

We work in collaboration with an interdisciplinary network of researchers, practitioners, journalists, civil society groups, designers, developers and public institutions across the world.

We’ve been busy working on our first project – A Field Guide to Fake News – the first portion of which will be launched at the International Journalism Festival in Perugia later this week.

Following is a preview of some of our plans and focus areas over the coming months. Further work streams are currently under development, including around data journalism, the sharing economy, big data in international development and the politics and sociology of quantification in the digital age. If you want to keep in touch you can follow on Twitter or sign up to the announcement list which you can find on the freshly designed website by Michele Mauri at Density Design.

What is the future of public information in an era of unprecedented datafication? How will new and emerging forms of digital data be used alongside existing forms of public institutional data collection around matters of public interest? What are the new methodological challenges around the layering and integration of different kinds of data? How can social science researchers develop a critical technical literacy around the use of “born digital” data? What kinds of politics and policies, mechanisms and capacities will be required to ensure that processes of datafication facilitate human flourishing, advance social progress and strengthen democratic political engagement, rather than stifling or undermining these aims?

The Public Data Lab aims to facilitate social science research, teaching and public engagement activities around the future of the data society. It will mobilise an interdisciplinary network of researchers, practitioners and organisations in order to develop and disseminate innovative research, teaching, design and participation formats for the creation and use of public data. It aspires to support deliberation and knowledge exchange around the creation and use of digital public data in the service of social research, policy-making, advocacy, journalism and public engagement around current and future global challenges – from climate change to tax base erosion, migration to automation.

In the longer term, we hope the Public Data Lab will pioneer collaborations around the following areas:

Collaboration would be organised around participatory design and research formats such as the “data sprint”. The data sprint has emerged at the intersection between Science and Technology Studies and New Media Studies, drawing on work formats associated with open-source software development in order to convene a range of actors to collaborate around the co-production of data and research projects (Venturini, Munk, & Meunier, 2016). These data sprints would be organised around a variety of themes, drawing on the expertise and interests of the lab’s network – including climate change, migration, energy, housing, tax, basic income, public finance, open government, open data, big data, automation, the sharing economy, digital rights and human rights.

The past few decades have seen an explosion in “born digital” data – including from social media services and online platforms, smart phones, digital devices and the web. These sources of data open up new avenues for the study for social and political phenomena (Savage & Burrows, 2007; Lazer et al., 2009). The Public Data Lab will examine the potential implications of a shift from “digitized” to “born digital” data and methods (Rogers, 2014). This methodological shift from a focus on polls, surveys and interviews to repurposing digital traces and big data is accompanied by a corresponding shift in ways of studying and thinking about of social life.

Drawing on research in digital sociology, media studies, communication studies and Science and Technology Studies, the lab will look at how “born digital” data has and can be used in the context of public policy. In particular, it will address questions such as: How might emerging sources of digital data be repurposed to inform policy research and practice? What kinds of capacities are required for social researchers, policymakers and public institutions to take advantage of these developments? What are the consequences of the growing use of born digital data for public policy-making?

The digital methods agenda has been developed in order to repurpose “born digital” data for the purpose of social, cultural and political research. The past decade has seen the development of tools and methods for using digital data from a wide variety of media – including search engines, social media and sharing platforms. These have been applied to study societal issues from migration and food safety to urban planning, illness and ageing (Rogers, 2013; Rogers, Sánchez-Querubín, & Kil, 2015).

Through a series of data sprints and other associated activities, the Public Data Lab aims to open up space for engagements between digital methods and public policy research – including showcasing and discussing the contribution of new digital tools, methods and born digital data in public policy research, as well as advancing methodological and theoretical reflection on their growing availability and use.

Through the Public Data Lab, we would also like to investigate how participatory design methods, processes and approaches can be utilised in order to engage and mobilise different publics around the creation and use of data. We would like to contribute to the socio-technical craft of facilitating public participation – whilst also encouraging reflection on the patterning and politics of participation, drawing on previous work in Science and Technology Studies and other fields (see, e.g. Marres, 2012; Lezaun, Marres & Tironi, forthcoming).

As well as exploring and documenting different work formats – such as the “data sprint” (Venturini, Munk, & Meunier, 2016; Venturini, Ricci, Mauri, Kimbell & Meunier, 2015) and other participatory data practices (Niederer & Priester, 2016), we would like to create a collection of recipes, resources, methods and work formats for engaging different groups around the making of data and data projects. In the first instance it is envisaged that these would be used in the context of members of the lab’s network – in particular research centres and civil society groups. In the medium term, we’re very interested in how these methods and processes could be utilised by public sector organisations to open up space for deliberation and public engagement around the making of official data, as well as informing experimentation towards what we describe as “participatory data infrastructures” (Gray & Davies, 2015). Here the lab would draw on leading public data projects and collaborations in the context of journalism (Gray, Bounegru, Chambers, 2012).

Finally, through the Public Data Lab we would like to explore and advance “data infrastructure literacy”. As the availability of digital data increases, many governments, companies and civil society groups have called for an attendant “data literacy” in order to ensure that different groups have the capacity to use and derive value from publicly available data. For example the UN has made the case for a “global data literacy” in order to realise the opportunities afforded by what it describes as the “data revolution” for sustainable development (Data Revolution Group, 2014). Data literacy is often envisaged in terms of a combination of technical, statistical and numerical capacities which support the interpretation, analysis and re-use of data – whether in the service of policy development, democratic deliberation, advocacy, journalism or technological innovation.

Whilst these elements of data literacy are clearly important, we want to cultivate the capacities not just to use and consume data as a kind of resource, but also to understand and engage with the socio-technical processes and infrastructures through which data is generated (Niederer & van Dijck, 2010). We would like to advance these forms of “data infrastructure literacy” (Gray, Gerlitz & Bounegru, forthcoming), through the research, teaching and public engagement activities of the Public Data Lab. By raising awareness of the diverse range of actors and forms of knowledge involved in the making of data of data, we hope to strengthen democratic engagement around issues which are often complex and technical, and yet play a crucial role in tackling major global challenges that we face.

Experimentation in this area would include looking at the ways of knowing, the forms of association and modes of experiences that are made possible through data infrastructures, as well as exploring how they might be organised differently in order to highlight the social, cultural and political work that underpins the production of data. Here we will partner with designers, journalists, artists and others to explore different ways of narrating and making sense with data infrastructures, as well as different ways of facilitating public involvement.