To coincide with the first East and Southeast Asian Heritage Month (#ESEAHM2021) this September, here’s a bit of our Hakka family’s movement story. It is cross-posted from kindredpacket and was also featured as part of “Stories of Our Heritage”, a live community storytelling event. There’s a petition to obtain official recognition for ESEAHM which you can sign here.

When my sister and I were little, we grew up with different stories about our family and where we came from. We used to sit with Gung Gung, our mother’s father, on fold-out chairs in the corner of his basement flat in San Francisco, with its pictures and quotes on the wall, his chess set, the blue glow of gas on the cooker, and he would tell us about where he grew up.

Po Po, our mother’s mother, would sing us songs from her childhood, and tell us phrases and sayings—most memorably “Have you eaten?” and “Eat, sleep, go to toilet”.

There were a few old small black and white portraits of family there. While we grew up with these stories and pictures, it has taken longer for us to piece together what happened…

Po Po and Gung Gung were both Hakka (客家, literally “guest families” or “guest people”). They had family connections in Guangdong and other areas of China. In the mid-nineteenth century, their ancestors were involved in the Taiping Rebellion, a bloody uprising that was eventually crushed with the assistance of British and French colonial troops and resources.

Many of the people involved in the rebellion fled. Our grandparent’s ancestors went to Borneo, Malaya, and Singapore. Gung Gung’s family came over from China in the 1860s and Po Po’s family a few decades later in the 1900s. 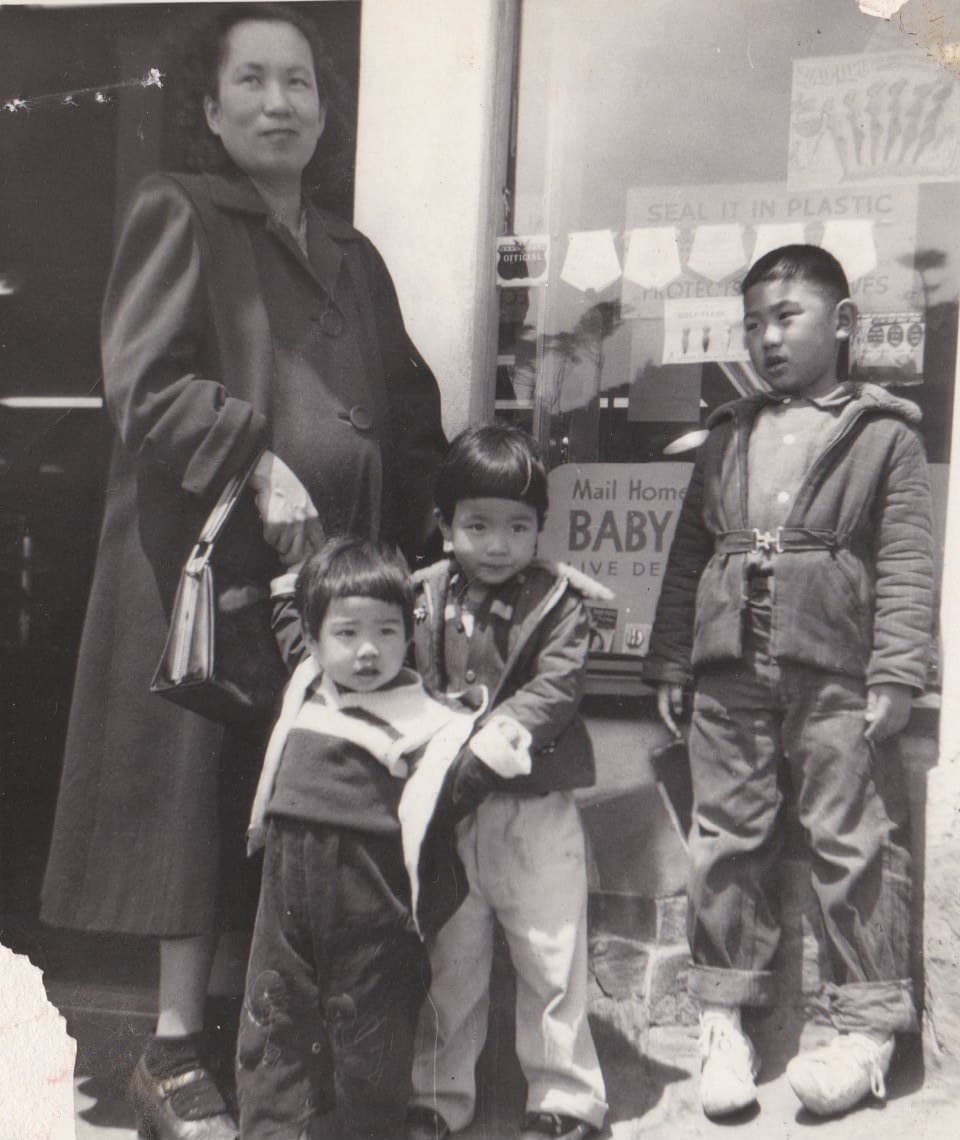 Po Po and Gung Gung came to the United States after World War II and the Japanese occupation of Malaya and Singapore. They sailed on a small freighter ship that went via Egypt to Baltimore, travelled onto New Orleans, and eventually settled in San Francisco where our mother and her siblings grew up.

In California, Po Po worked at a fruit canning factory, at a hospital filing medical records, as an assistant at a maternity ward, and took evening classes in accounting. Gung Gung worked several jobs while training to be a doctor.

Our mother and her siblings were born in San Francisco in the 1950s. They were the first Asian family on their street and one of the first Asian families in the Inner Richmond district sometimes called the “second Chinatown,” which makes an appearance in the recently released Marvel film Shang-Chi & the Legend of the Ten Rings.

Po Po and Gung Gung faced discrimination when they arrived and often did not feel welcome. Landlords turned them away upon meeting them. When they finally found a place to live, people threw tomatoes at their house.

They had a letter warning them of potential deportation, which they avoided thanks to our uncle, who was born in the U.S. and therefore had U.S. citizenship. They started teaching Hakka to our uncle but stopped after kindergarten teachers raised concerns about his behaviour. They complained that he occasionally would reply in Hakka rather than English. After that, Gung Gung and Po Po did not teach Hakka to their children.

In the 1950s, my mother and her older brother used to wear cowboy hats and “hold up” the tram that ran along their road. The tram driver would sometimes give them a nickel. She said it felt like they were assimilating—becoming Americanised.

The 1960s brought the civil rights movements and the Black Panther Party across the bay in Oakland, mobilisations against the Vietnam War, the “Summer of Love”, free speech protests in Berkeley and campaigns against the eviction of residents of the International Hotel.

My mother was involved in community organising and anti-racist movements in the 1970s. She was inspired by a class on Asian American Women at San Francisco State University and got a scholarship to go to Princeton, where she was interested in how faith groups could serve as vehicles for social change. She considered becoming ordained to continue her community organising work, and while at Princeton, she met my father, who had come over from Scotland to study.

After graduating, my parents went to Edinburgh, where my father completed his PhD and my mother worked in a library. In the 1980s, my mother found a teaching job for him in Sussex, to which he applied and got.

My sister and I were born and grew up in Sussex. Instead of becoming ordained, our mother thought she could better serve by becoming a psychiatric nurse, which she trained for while we were in primary school. She worked in the NHS in a psychiatric intensive care unit from the 1990s up until her recent retirement.

While there, she was able to focus on helping people with complex needs and working with colleagues from all over the world. Her two sisters and brother all became nurses, and their children all work in healthcare. My sister and I both teach.

Like Po Po and Gung Gung, we have all tried to find ways to serve.

Growing up, we used to go and visit Po Po and Gung Gung in San Francisco. They divorced but continued to live in the same house, with Po Po living upstairs and Gung Gung living downstairs.

Po Po would ask us to help her move water that she’d collect from washing things in the kitchen sink to pots of plants and flowers that were rescued from events and functions in the area. She would give them to friends, family, people in the neighbourhood and passers-by so they would have a new life.

I remember her hanging laundry on the back porch, and then stretching in the sun and spending a moment to soak up the rays and appreciate the light, the air, the colours.

Gung Gung used to help out in the community by tutoring people for their citizenship tests, offering piano lessons, and giving money. As he got older he was always giving away his books and things to people who might use them.

Every week, my mother still calls relatives in Singapore who knew Po Po and Gung Gung when they were little.

Where are we from?

Though it has not always been easy, we feel lucky that there are many places that we have been able to call home.