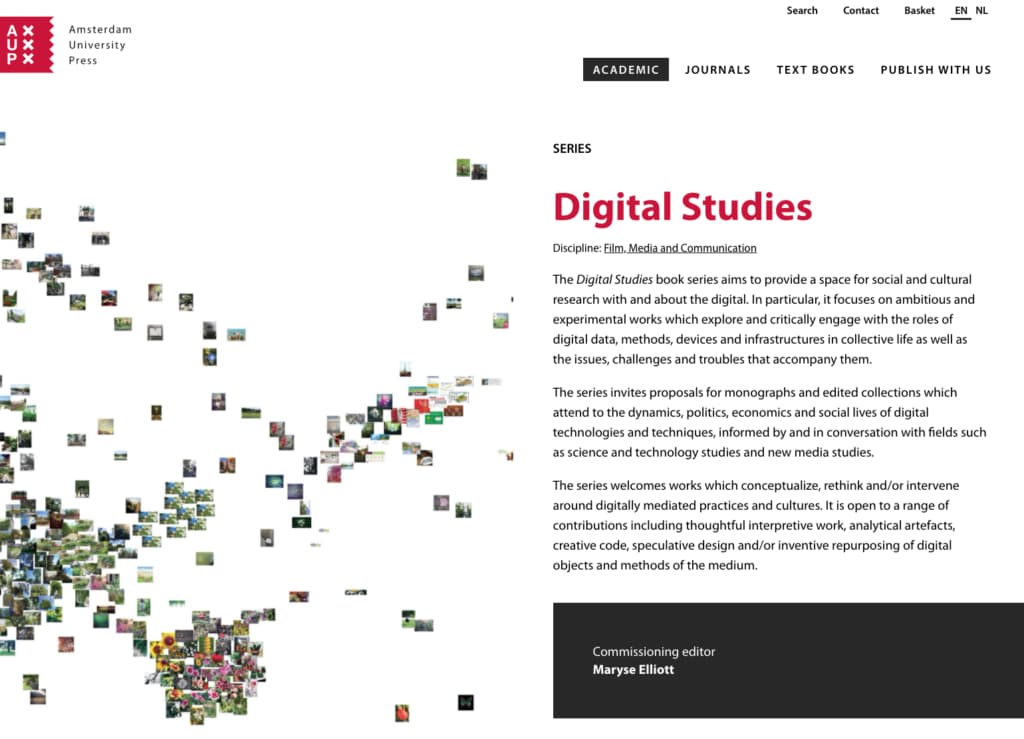 To coincide with the launch of The Data Journalism Handbook: Towards a Critical Data Practice, today we’re also launching a new Digital Studies book series on Amsterdam University Press. This is co-edited together with Tobias Blanke, Liliana Bounegru, Carolin Gerlitz, Sabine Niederer and Richard Rogers.

We are particularly pleased to have this series based at AUP, which has a longstanding commitment to open access publication and which has published number of titles at the intersection between new media studies and science and technology studies in recent years, such as Issue Mapping for an Ageing Europe (Rogers, Sánchez Querubín & Kil, 2015), The Datafied Society: Studying Culture through Data (Schäfer & Es, 2017), Data Visualization in Society (Engebretsen & Kennedy, 2020), The Politics of Social Media Manipulation (Rogers & Niederer, 2020) and Engines of Order: A Mechanology of Algorithmic Techniques (Rieder, 2020).

Further details about the new series are copied below.

The Digital Studies book series aims to provide a space for social and cultural research with and about the digital. In particular, it focuses on ambitious and experimental works which explore and critically engage with the roles of digital data, methods, devices and infrastructures in collective life as well as the issues, challenges and troubles that accompany them.

The series invites proposals for monographs and edited collections which attend to the dynamics, politics, economics and social lives of digital technologies and techniques, informed by and in conversation with fields such as science and technology studies and new media studies.

The series welcomes works which conceptualize, rethink and/or intervene around digitally mediated practices and cultures. It is open to a range of contributions including thoughtful interpretive work, analytical artefacts, creative code, speculative design and/or inventive repurposing of digital objects and methods of the medium.