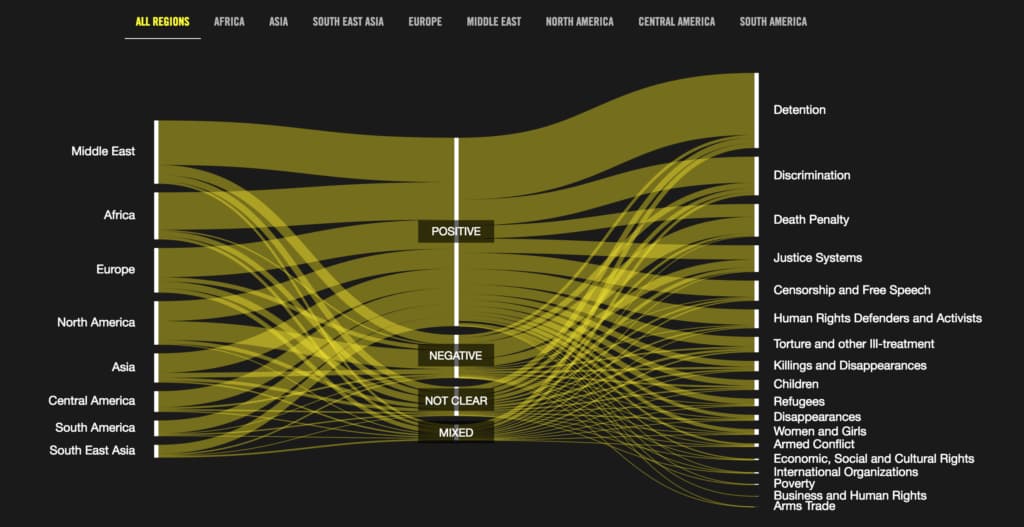 Amnesty International have just published the results of a data sprint about their historical database of Urgent Actions, which I coordinated as part of the Digital Methods Initiative Summer School 2016. A selection of outcomes published by Amnesty International can be found here. A selection of further materials from the Summer School project can be found here.

The database gave a fascinating insight into both the more recent digital practices as well as the longer history and development of one of the world’s biggest and best known human rights advocacy organisations. The Urgent Actions database can be understood as a form of “data witnessing” – about which I’ll be writing more in the coming months.

The data was generated as part of the Amnesty Decoders project which saw over eight thousand volunteers involved in the classification of the reports, including how many people were subjected to abuse, the names and genders of those affected, and whether the outcome of the action was “positive”, “negative”, “mixed” or “not clear”.

The analysis by the Summer School group included studying: engagement with the crowdsourcing project; looking at what the database says about Amnesty’s interests and focus (including the geography and temporality of actions); the classificatory practices of Amnesty’s offices around the world; and analysing the outcomes of urgent actions.

If you’re interested in learning more about the research approach of the Digital Methods Initiative (where I’m a Research Associate), the Winter School 2017 is currently open for applications and project pitches on the theme of “data infrastructures”. If you’re potentially interested in pitching a project please do get in touch.